This note sets out the methodology we are using to include costs to the 2050 Calculator.

The 2050 Calculator includes costs for all activities associated with greenhouse gas emissions. This includes fossil fuel combustion, industrial processes, agriculture and waste, land use, land use change and forestry (LULUCF). International aviation and shipping emissions are also included in the 2050 Calculator for complete coverage of all sectors. [1]

There are 130 technologies in the 2050 Costs Calculator and capital, operating expenditure and fuel costs are included for each of these to 2050. These cost estimates cover the whole of the energy system (everything from: power stations and industrial processes; to cars, planes and trains and the fuel they use; to gas boilers and cavity wall insulation). These costs should not be confused with the bills households pay for their electricity and heating.

The 2050 Costs Calculator has the following cost information for each technology and fuel in 2050:

The cost estimates in the 2050 Costs Calculator are drawn from a wide range of credible, published sources. Sources include economic and energy models (in particular MARKAL[2]), sectoral analysis (Parsons Brinckerhoff, Mott MacDonald, AEA, NERA), UK Government Departments, independent analytical bodies such as the Committee on Climate Change and wherever possible the real world cost of technologies as reported by financial bodies or the media. The 2050 Calculator includes no new evidence about costs, it simply brings together existing published assumptions.

There are a number of important caveats to bear in mind when interpreting results from the 2050 Calculator; these are set out below.

This paper sets out the methodology used to calculate capital, operating costs and fuel costs in the 2050 Calculator.

The 2050 Costs Calculator released today updates the 2050 Calculator as published in July 2010 and March 2011. The 2050 Calculator now includes information on capital, operating and fuel costs and air quality impacts. It also has updated trajectories for international aviation and shipping and waste.

Scope: Technology and fuel costs only

The Calculator will capture the technology and fuel costs associated with supplying and using energy and producing emissions between 2010 and 2050. Specifically:-

For each of the c. 130 technologies in the 2050 Calculator, we include capital, operating costs and fuel costs.

The 2050 Calculator uses default cost assumptions which are consistent with the latest version of the MARKAL model. These default assumptions do not necessarily reflect the Government's views about future costs.

For those sectors where it is more problematic to map from MARKAL to the Costs Calculator (such as heat and industry) and for sectors which MARKAL does not cover (agriculture and waste), we have used a 35th centile assumption.

In a small number of cases, we did not use the MARKAL estimate or the 35th centile. This was the case for international aviation and shipping (2010-2050 costs) and electric cars (2010 cost).

To see a list of which costs are from MARKAL and which are not view the sources of default costs page.

In the "test assumptions" page in the web tool, the user is able to explore the effect of making more optimistic or pessimistic assumptions about future costs.

Our cost range is a simple way of attempting to capture all the above factors.

The high and low ranges

The cost range for 2050 represents the highest / lowest that credible experts can foresee costs being. Specifically:

Figure 1 illustrates what the high/low costs range and default costs could look like.

We have not used a point estimate for 2010; this reflects the reality that the same technology is currently sold in the market for a range of prices.

Where there is evidence to suggest it, the 2050 "high" cost estimate is higher than costs today. For example, the 2050 high cost for nuclear is £4.5bn/GW (compared to a typical rate today of £2.1bn/GW). 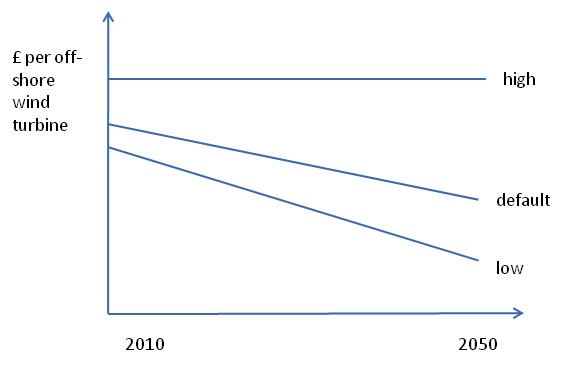 There are three advantages to this simple methodology for defining high/low costs:

The high/low costs we use for each technology will be the same regardless of which pathway the user selects. In other words, costs are treated as exogenous to the model, not endogenous.

We will do this for two reasons:

Although costs are exogenous, we do make a provision for minimal technological improvement over time. For most technologies, we assume incremental improvements in energy efficiency over time. So although the high, low cost estimates appear constant over time, on a like for like comparison prices are actually falling slightly.

The user can select to view the costs of their pathway relative to any pathway. But as a default, the Calculator shows costs relative to not tackling climate change. Click here to see more infomation on this pathway: All Level 1s

Important caveats and limitations of the analysis

There are a number of important caveats to bear in mind when interpreting results from the 2050 Costs Calculator:-

The 2050 Calculator should be used to answer questions such as:

But it should not be used to answer questions such as: