There are 2 levers for the industrial sector: A) industry output, B) energy intensity. Lever A sets sectoral growth rates. Energy intensity, on the other hand, controls four other drivers: i) energy demand multiplier, ii) fuel split (i.e. electrification), iii) process emissions intensity and iv) CCS (Figure 1). Of these five drivers, fuel split and CCS are defined for total UK industrial figures while the remaining are defined at sectoral/fuel level. The chemicals, metals, and minerals sectors are represented separately while the remaining sectors are lumped together under ‘other’ category. The Figure 1 below presents the overall structure of the industrial sector. 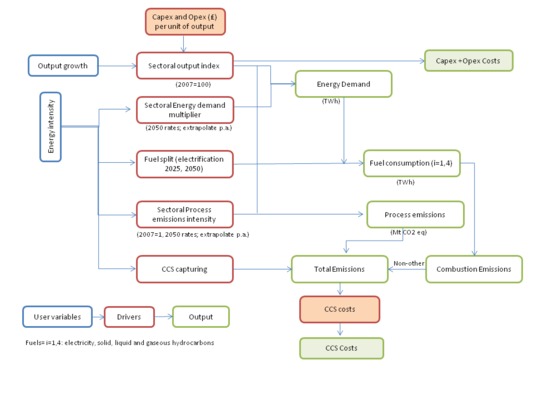 In order to account for the costs due to changes in output levels, we have used capex and opex data that we received from BIS, based on Annual Business Inquiry (ABI) 2007. From these, we have calculated the unit costs per unit of output.

In order to account for the costs of technologies with different energy intensities, we have made assumptions in terms of how much they would be higher from the no-effort (level 1) case. In low cost case, effort level 2 costs are 0.13% higher than effort 1 level, whereas level 3 ones are 2% higher. In the high cost case, these are 0.25% and 4%.

CCS is calculated separately, working back from emissions saved (both through specific process emissions and other) through deployment of CCS technology to calculate an energy equivalent which can then be costed.